The age-in-dating issue really strikes a chord for some of you.† Lights a bulb. Sets off a nuclear device betwixt the ears.

OK, for the second time yesterday,‡ I was dead wrong. Dead. Wrong.

Let me take you back sixteen years to when I was 24 and was dating a 39-year-old man with two ex-wives and three ex-sons.

I was not interested in men my own age, primarily because there *were* no 24-year-old men in my radar. There were only 24-year-old boys. Gross, hedonistic, sexually irresponsible, emotionally retarded, alcohol-soaked, financially untenable boys.

If I knew then what I know now, I might have spent less time looking for a meaningful relationship and rode out my twenties on a wave of blissful sexual excess.

We could *not* agree on a radio station. Not for long, at least. He liked the classic rock station,§ which I could go with as a novelty, but my heavy metal/goth sensibilities needed feeding too. Looking back, it feels like Rich and I spent all our time together twitting each other about our musical/movie/TiVi taste and trying to find something we could both listen to/watch.

The Fling (your Bachelor #4) is fine. He isn't immature. He doesn't twit me about my age. He is attentive, accommodating, present, loves my body, has a big dick and we can talk. Not that we talk a lot, but we always do and I suspect if this were all about sex, we wouldn't want to.

Part of me is uneasy about admitting all this (to y'all or to myself) because I don't want to be caught in yet another web of emotional hope and disappointment and it's easier to play cool% if I can casually say, "Yeah, I'm just in it for the sex."

Besides, if we ever have a Talk or he tells me about some other girl he's falling for$ I can more easily bounce into the fun fuck-buddy role and lick my wounds in private¶ where they won't embarrass me.

Besides, the rug burn? Totally worth it. And a funny story: when he saw the rug burn yesterday morning, he made a big show of matching it to the couch, the recliner, the stairs... to determine exactly where it happened.

"I watch a lot of CSI," he said, "and I'd say from the angle and the trajectory that this came from the couch. Definitely the couch." 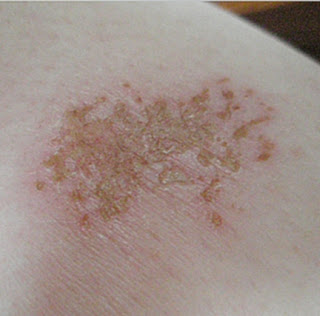 [SUMMARY: She had sex on the stairs?]

Onward to the Yarn P0rn!

Here is the first shipment: 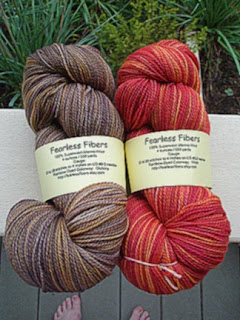 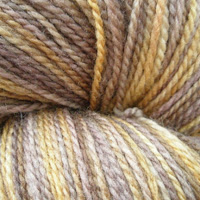 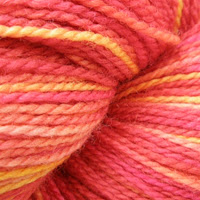 The true colour (at least on my monitor) is somewhere between the wide shot and the close-ups, leaning a little toward the close-ups.

I'm ever-so-slightly disappointed in the colours. I have a gorgeous hank of purplepurplepurple sock yarn from Fearless Fibres that eca-elf sent for my birthday. The colours are rich and saturated, ranging from almost-aubergine, through royal and right into a deep reddish purple.

Lust may look very like that purple colour to me.

Shouldn't sin be rich and saturated? If your sin is kinda medium to faded, you're not getting enough out of it. Or you're Catholic, but that's another issue.

Gluttony is billed as being rich shades of caramel and chocolate, which I get in theory. I don't see much of what I would call chocolate in this. I think there should be much more dark. I think the caramel is gorgeous, but against the middling mutt browns,# it just looks yellowy.

Mostly, it looks like a Milky Way to me. Nothing wrong with Milky Way, but...

I don't dislike either yarn out of context. But deadly sin is mythic and disproportionate. These are just too nice.

[SUMMARY: I ain't selling my soul for a Milky Way.]

Huh. I'd swear I uploaded pictures of the bonus gift tags Fearless Fibres sent. They're cute. I like them. I'll use them. I wish I had a picture to show you. Besides... bonus gift? Right in the category of Goody Bag and Limited Edition in AntiM's rickety world.

I almost hate to do this to you, 'cause WIP pics are frequently dull. 'Specially fingering-weight size 12 (men's) socks. 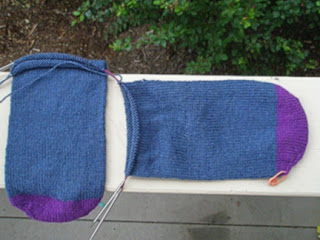 The girl version of Big Baby is coming along swimmingly. I have less than two-and-a-half balls left to knit. For some reason, this one seems to be taking way more yarn. The boy version I knit a couple of months ago called for nine balls and took just over eight. This one looks like it might take all of ten. 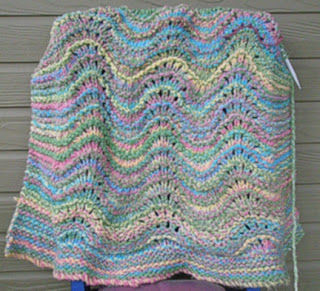 Lizard Ridge is such fun. 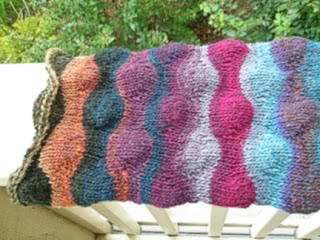 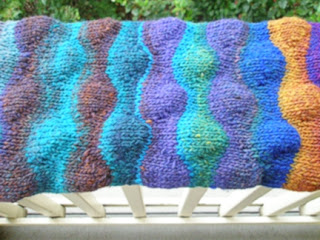 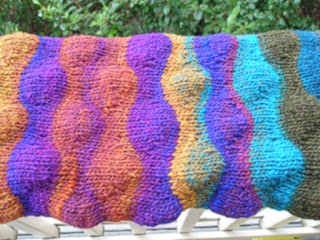 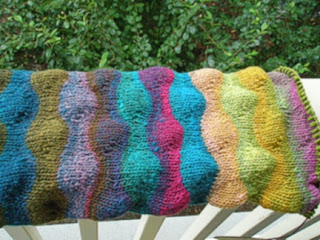 Seriously, how many of those have you seen? But this is *my* Lizard Ridge. It's special.††
[SUMMARY: blahblah Lizard Ridge blah...]
No matter how many Lizard Ridges you've seen in your Innernets travels, I bet you've seen more of these: 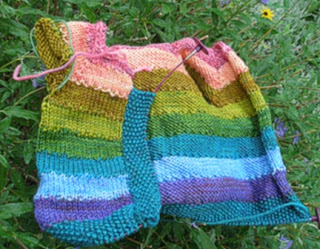 I do love this little sweater. It took about... four hours? five? to get this far, which puts it in the realm of something I could knit easily in a weekend if I needed a last minute gift. Particularly since I don't intend to have to frog the first two colours for having forgotten the seed stitch when I do the next one. And I won't have to read the instructions next time.
It's that easy.
I have since done the seed stitch border on the left front and applied i-cord all the way down the left and around the corner to pick up the bottom to i-cord.
[SUMMARY: blahblah Tulip blah...]
Knitting pictures to make you feel better, crane picture to make me feel better. 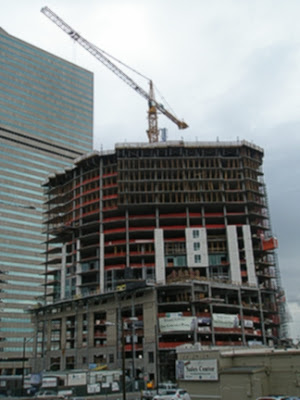 In culinary adventure news, in eating my own weight in sushi last night, I tried sea urchin for the first time. Bleagh. OK, it tasted fantastic, but I couldn't quite get past the texture. Runny fish pudding... it just ain't right.

[SUMMARY: Some things just shouldn't go in your mouth. Shut up.]

In TiVi news, Fling and I rested with some BBC the other night and caught Top Gear. Have you seen this? If you like MythBusters, I think you'll like this. Two (maybe three) British guys race cars with celebrities, then trick out cars and perform experiments on them as dictated by... the producers? The viewing audience?

Monday's episode featured a Chevy... um... it looked like a Cobalt. A bunch of aging musicians and soccer players dropped by the track and raced it, trying for the best time.

Meanwhile, the hosts drank tea from china cups near the track (Fling and I both agreed they were at least as death-wishy as the people taking a Chevy Cobalt to 160 mph, sitting that close to the track. Also that most of the people appeared to be hammered). The aging musicians had a keyboard jam while a soccer player took his turn.

It was slightly less surreal than it sounds.

Next, they drove what I think was a Porsche. I thought it was a 959, but it clearly wasn't once I got a good look at it. One of the celebrity guest drivers lost control and drove it to the infield, leaving a trail of tires and bits all the way.

After the break, they came back and turned a mini-van into a convertible, after which they had to perform three tasks with it:

They weren't allowed to fix anything between challenges, so the frame of the convertible top was all wonky when they went to the animal preserve.‡‡ After monkeys rode it all the way through the preserve, poking and peeling the canvas top, they took it to the car wash. At night. And bailed when the roof collapsed.

They peeked around a wall to see smoke pouring out of the car wash.

Yeah, like teenaged boys after being caught in an ill-advised egging, they took off, leaving the smoking wreck of the converted mini-van for the owner of the car wash.

Good TiVi. I highly recommend it. Besides, Ewan McGregor is going to be on next week.

[SUMMARY: Boys doing dumb things are irritating in your living room, but funny on TiVi.]

Now go have a happy Wednesday.

†FOOTNOTE (crossed): Also maybe the vicarious prurient joy y'all are getting from my current sluttastic lifestyle.

‡FOOTNOTE (double-crossed): Ally very thoughtfully (as only Ally can) corrected the error of my ways in literally judging a book by its cover in the comments on her post yesterday.

§FOOTNOTE (swerved): Which at that time, boys and girls, did *not* play 80s music. "Classic rock" meant mostly 50s music.

%FOOTNOTE (percented): Like when the cat falls clean off the dresser and just pauses right as he landed to lick the body part closest to him like it was all part of his grooming strategy.

$FOOTNOTE (moneyed): No, it's not a normal topic of conversation, but we have rolled out little bits of our love lives on occasion. I can see it happening. Suddenly I'm in some weirdly incestuous relationship where I'm playing big sister in one room and Penthouse Pet in another.

¶FOOTNOTE (paragraphed): Except for, y'know, the handful of dearest friends and family to whom I whine and obsess endlessly in these cases. The more I love you, the less exempt you are.

#FOOTNOTE (pounded): When Red and I were speculating on what colours we would use for which sins (before we received our yarn), I said I'd probably make sloth brown (not unlike this, but with less caramel) simply because... well, sloths are brown.

††FOOTNOTE (ddouble-ccrossed): Hey, I just sold my soul for a Milky Way. Humour me.

‡‡FOOTNOTE (doubble-crossssed): On their way to SafariLand (not necessarily its actual name), they were arguing about whether they were more frightened of lions or monkeys. After much hilarity involving sign language to illustrate monkey teeth vs. lion teeth, they boiled it down to "would you rather be locked in a phone booth for a half-hour with a lion or a monkey?" One guy stuck to monkey, the other two stuck to the lion.

When they got to SafariLand, the lions were too busy making little lions to even pay attention to the mini-van with the chewy centre, whereas the monkeys attacked the vehicle and eventually rode it all the way to the edge of the park.

There's a Matt Millen joke in there, I just know it.
Posted by Marin (AntiM) at 7:38 AM