Trolling Amongst the Young

Ah, commingling with the twenty-somethings. Teen-somethings. Children and their handlers.

Red took me to the KTCL Big Gig Saturday.

We dutifully checked the Coors Amphitheatre website for forbidden materials and packed accordingly. As it turned out, they were letting cameras, backpacks† -- indeed, entire people -- in without hassle.

In other words, I coulda brought my camera.

I did get a couple of pictures outside in the parking lot. 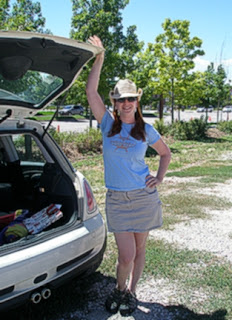 Um... Red said, "Get sassy," so I emerged from my chrysalis, a full-feathered dork. 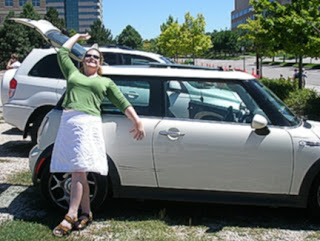 If anybody knows a crane operator who wants to get lucky, give him my number 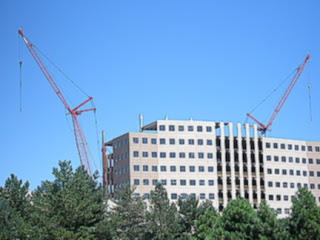 Red took a whole bunch of pictures on her camera phone, so I bet she'll post them later today. Or tomorrow. But if you need to see random Big Gig pictures, the radio station called for fan photos for their website.

Yep. Not only did they allow cameras, they encouraged them.

Right now, you could be looking at pictures of the band we affectionately called Josie and the Pussycats. Or the girl in the Typical Whore t-shirt. Or the foot-tall mohawk. Or Big Dot Girl. Or Red knitting. Or the really hot guy behind us‡ who definitely is allowed to take his shirt off§ any ol' time.

ETA: Red has posted. And she has pictures of mohawks and Big Dots. And I completely forgot about the Aspiring Male Model. How could I forget him? He had the coolest shoes I saw all day.

I was a tiny bit worried about taking knitting, not because, say, it was on the banned list,$ but y'all know what it's like going through airport security: it just depends on who you get, what their level of assholedness may be on that day and whether they got the memo.

Of course, with people bringing in full backpacks, bongs and cameras, the knitting was probably a shoo-in all along, though I like to think the sweet young boys¶ that checked my bag on the way in are telling their friends RIGHT NOW about the goofy old broad who brought knitting in to the Big Gig.

During our lunch in a secret, shady hidey-hole in the trees, Red and I began playing, "How many people are older than Marin?"

We stopped at 62, which means I was no older than the 63rd oldest person there. The fact that most of them were there escorting tween offspring should not be taken into account.

I was blinded about six minutes into the day by my sunblock. For the time being, I hate Neutrogena# and their lying, betraying ways. Sweatproof, my ass.%

Water is four dollars a bottle at the venue. Most food booths don't take plastic.

I worked on Lizard Ridge, starting the second set of bumps for the third time. I was counting out loud†† because I figured the pattern may very well be wrong.‡‡

Turns out, it's written kind of oddly and is not wrong, per se. It just gives some of the directions twice. In two different ways. The pattern thinks it's clarifying, I think I have to do the same thing twice and then I run out of stitches. Simple misunderstanding.

Now I get why Tani hates it when I give her directions and give her too much information.

My favourite band in the lineup was the first one, Tickle Me Pink. Turns out§§ they're a local-ish band (Ft. Collins). Imagine.

I really liked I Hate Kate.

Plain White T's were pretty good.¶¶ Single File (a Denver band) was about 50/50 for me.

ETA: Red has admonished me that Jack's Mannequin (whom I completely forgot, which may tell you something about the caliber of music as I see it) is the wussy piano band. Motion City apparently rocked, but I don't much remember them either, so meh.

Oh, wait... it's coming back to me. Motion City was the one where we said, "With that many guitars on stage, you'd think we'd hear more... guitar."

Blue October was awful. Sucked the life right out of me.

Now, I don't like most country music (no, Blue October is not country and, yes, this is going somewhere), but I can appreciate that it actually *is* music. Blue October? Just sucked. I'd rather be locked in a room for a weekend listening to Kenny Chesney or Alan Jackson than four songs of Blue October. Since Red felt the same way,## we beat our retreat before song three had even begun.

This meant we missed Social Distortion, the headliner, which may have been a shame. They've been doing the same song for thirty years, but it's a pretty good song. And I've heard from (albeit very biased) people that they put on a hell of a show. But Blue October ruined it for everybody.

Besides, what we lost in Social Distortion, we gained in massive traffic convenience.


†FOOTNOTE (crossed): Which they CLEARLY stated we couldn't bring backpacks, food, cameras... and we're just too law-abiding to put it to the man. Or sweet little boy who mans the front gate. Boys the front gate?

‡FOOTNOTE (double-crossed): Who was on the list of people older than AntiM. Imagine the thrill.

§FOOTNOTE (swerved): After seeing several poor examples of men with their shirts off, we began developing rules:

Yeah, catty doesn't begin to describe it. God on our side, to be sure, but catty.

$FOOTNOTE (moneyed): What I should have been worried about was the sixteen-year-old boy behind us who was trying to talk his friends into moving closer to the stage, using as one of his reasons, "They're, like, knitting."

¶FOOTNOTE (paragraphed): I can't imagine they were even shaving yet and they were in charge of front gate security.

%FOOTNOTE (percented): As opposed to "sweatproof my ass," which really wouldn't have been such a bad thing on Saturday. Too much information?

‡‡FOOTNOTE (doubble-crossssed): 'Cause you know, knitted by thousands, foiled by one knitter who can't count to four.

§§FOOTNOTE (watch those curves!): They won a battle of the bands to get the opening slot on the mainstage instead of playing the crappy high school choir platforms outside the amphitheatre proper. We couldn't find out who they were. I had to wait until I looked online Sunday. Mystery band!

##FOOTNOTE (totally pounded): Thank the katzen in himmel for small blessings, like friends who are on the same page just about the time you're ready to jam a knitting needle in your left ear to make the pain stop.
Posted by Marin (AntiM) at 7:41 AM